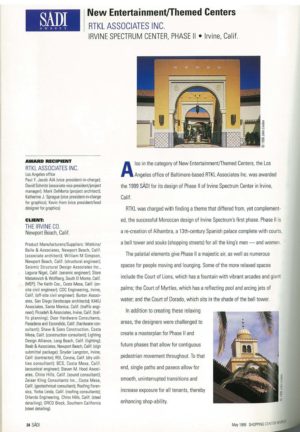 Also in the category of New Entertainment/Themed Centers, the Los Angeles office of Baltimore·based RTKL Associates Inc. was awarded the 1999 SADI for its design of Phase II of Irvine Spectrum Center in Irvine, Calif. RTKL was charged with finding a theme that differed from, yet complemented, the successful Moroccan design of Irvine Spectrum’s first phase. Phase II is a re-creation of Alhambra, a 13th-century Spanish palace complete with courts, a bell tower and souks (shopping streets) for all the king’s men – and women. Full Article