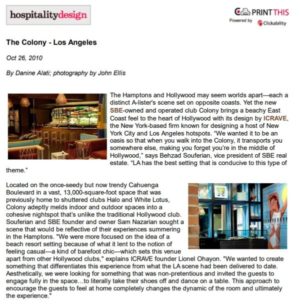 The Hamptons and Hollywood may seem worlds apart—each a distinct A-lister’s scene set on opposite coasts. Yet the new SBE-owned and operated club Colony brings a beachy East Coast feel to the heart of Hollywood with its design by ICRAVE, the New York-based firm known for designing a host of New York City and Los Angeles hotspots. “We wanted it to be an oasis so that when you walk into the Colony, it transports you somewhere else, making you forget you’re in the middle of Hollywood,” says Behzad Souferian, vice president of SBE real estate. “LA has the best setting that is conducive to this type of theme.” Full Article